Creative Bioarray is a reliable Parallel Artificial Membrane Permeability Assay (PAMPA) provider. Over the past years, Creative Bioarray has developed expertise in PAMPA. By working with a variety of customers, we can perfectly meet your project requirements and budgets.

Drug permeability is one of the most important factors to be considered for predicting oral drug bioavailability. Permeation mechanisms through biological barriers include active transport, passive diffusion, paracellular, and efflux. The body absorbs nearly 80~95% of the recorded commercial drugs through passive diffusion.

For permeability screening, the Caco-2 cell monolayer permeation method has been widely and successfully used in drug discovery and early development. With the need for reduced cost, increased predictability, and higher throughput in drug discovery, other methods are needed to assist Caco-2 assay.

PAMPA uses two aqueous buffer solution holes separated by an artificial membrane. The artificial membrane is composed of a lipid-oil-lipid sandwich structure in an organic diluent supported by a porous filter plate matrix. And then, the test compound diluted in the buffer is placed in the donor well. The compound enters the artificial membrane from the donor pore, entering the acceptor pore by passive diffusion. The compound's effective permeability (Pe) is utilized to determine the rate of permeation. Compared with cell-monolayer methods, the time required for the experiment is greatly reduced. Only passive diffusion is tested, and there is no metabolism, no transporter proteins, so there is no need to worry about saturation.

The PAMPA permeability test is based on the passive diffusion of the target compound through the artificial membrane. PAMPA synthetic membrane has a lipid-oil-lipid sandwich structure built into the pores of the porous filter. The middle oil layer maintains a strong and stable PAMPA membrane, ultra-thin to minimize compound retention and interference with compound penetration (Avdeef, 2005; Kerns et al., 2004).

Figure 1. The schematic diagram of the PAMPA model 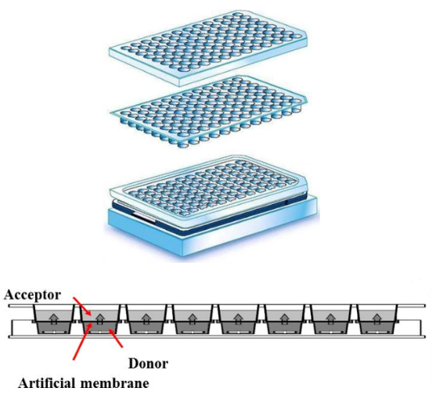 The apparent permeability and recovery of the test compounds were determined in duplicate. Compounds were quantified by LC-MS/MS analysis based on the peak area.

In Vitro Permeability and Transporters: