Point mutations in the genome are the cause of many genetic diseases including various tumors that involve point mutations in oncogenes and tumor suppressor genes. Determining the mutagenic potency of compounds using an indicative method is of considerable importance.

The bacterial reverse mutation assay (also known as Ames assay) is widely used in genotoxicity screening of test articles for their mutagenic potential (particularly, point mutation-inducing activity) and is regulated in the OECD genetic toxicology test guidelines. In this assay, amino-acid requiring strains of S. typhimurium and E. coli carrying mutations in genes of the histidine and tryptophan operon are used to detect point mutations caused by mutagenic compounds. When reverse mutations occur, the bacteria restore their capability of synthesizing essential amino acids and can be detected by their ability to grow in the absence of the amino acid required by the parent test strain.

The bacterial reverse mutation assay is carried out according to the OECD Guideline 4711. Suspensions of bacterial cells are exposed to the test article in the presence and absence of an appropriate exogenous metabolic activation system (Aroclor 1254-induced rat liver S9), either by plate incorporation or by pre-incubation method. The mixture is mixed with an overlay agar and plated onto minimal medium lacking the essential amino acid. Revertant colonies are counted two or three days later and are compared to that of the control plates.

At least 5 strains of bacteria should be used in the assay. We typically use a combination of S. typhimurium strains TA98, TA100, TA1535, TA1537, and E. coli strains WP2urvA pKM101. Other strains including S. typhimurium TA97, TA97a, TA102, and E. coli WP2 are also available. The number and set of strains can be chosen according to the regulatory requirements. 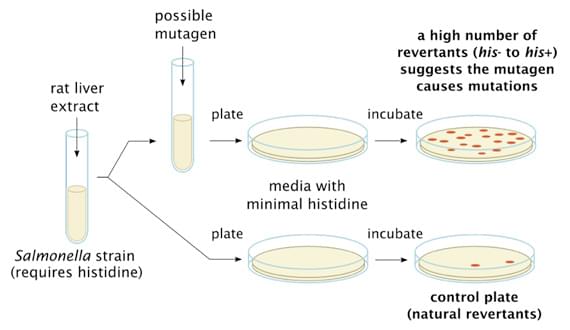 Creative Bioarray provides Ames test following GLP principles2. Typically, a draft study plan is prepared and reviewed by the sponsor and our quality assurance (QA) personnel after the collection of the characterization and formulation information of the test articles. The study can get started after the approval of the study plan by both parties.

For test compounds with no toxicity or solubility information, we will perform range-finding tests before the main assay, and additional fees may be charged.

After the study, a draft report of the results will be prepared for the sponsor and the quality assurance group to review. After the final approval, the final report will be provided with a QA statement.

If you’re interested in our service and want more information, please feel free to leave a message below, or contact us. Our well-experienced experts will get back to you to help with your project.

According to the OECD Guidelines for Testing of Chemicals, experiments with the tested agents, positive and negative controls, were conducted in triplicates on 5 test strains, S.typhimurium: TA98, TA100, TA1535, TA1537 and E.coli: wp2[pKM101]. The characteristics of tester strains are shown in Table 1.

Tester strain cultures were grown overnight in nutrient broth at 37°C. S9 mix was prepared immediately prior to its use in experimental procedure. Top agar was prepared by adding agar powder and NaCl to water. Add test article, S9 mixture or PBS buffer, and test strain to selective top agar. Mix immediately, then the six-well plate was inverted and incubated for 48 to 72 hours. Count immediately after the incubation.

On the day of ames test, the genotype of each strain was detected according to the OECD guideline.