Though contamination is a major factor to influence the cell growth and proliferation, there are series of methods to prevent or eliminate contamination. In normal conditions, the treatment of suspected infection may just discard a single potentially infected culture. But if the contamination problem continuously exists, it would be totally different – isolation from other laboratories, thoroughly clean, and sterility tests are absolutely essential. Good training of staff, attention to laboratory layout, appropriate use of quarantine for new cultures or cell lines, regular cleaning and maintenance, and quality control are important factors in preventing contamination in cell culture laboratories.

Sources and Forms of Contamination

The human operator is potentially the greatest hazard  in the laboratory. Sloughing of skin scales from laboratory workers  constantly seeds the environment with microorganisms and with the high levels  of commensal microbes (i.e. normal inhabitants) in parts of the human mouth  even just talking will generate potentially contaminating aerosols.  Furthermore, an individual laboratory worker with an infection will represent  a much higher risk source of contamination.

Materials and staff coming into the laboratory and  points of access to the environment (drains, ventilation grills, and unsealed  ceiling voids) will inevitably provide a constant supply of fresh  contamination which will accumulate on laboratory surfaces and multiply in  damp areas (e.g. fridges, sinks, waterbaths, and humidified incubators).

Clearly procedural and physical control of materials  coming into the laboratory, laboratory cleaning and aseptic technique will  all be important activities that combined, will help to keep cell cultures  free of contamination.

For primary cells, isolated directly from animal  tissues, or their early passages are at a particularly high risk of  contamination as the dissection process may promote contamination from the  natural commensal flora in certain tissues and any subclinical infection.

Invariably bacterial or fungal contamination will result in total loss of the affected culture. Recovery of  cell lines from such overwhelming contaminants is undesirable as the  contamination may survive in spite of antibiotic treatment only to reemerge  later and in some cases with increased antibiotic resistance. Eradication of  fungi is especially difficult as effective antifungal agents are often  cytotoxic to the cell line and fungal spores are much more likely to persist  in cultures and the environment only to cause intractable problems later.

Mycoplasma are very small Mollicutes (not bacteria),  they typically grow adhering to the cell membrane which are a widespread  cause of cell culture contamination, originally arising from animal tissues,  reagents of animal origin and even human operators. Mycoplasma infection can  spread rapidly in the laboratory as contamination may not be obvious to the  operator (i.e. no medium turbidity), is resistant to commonly used  antibiotics and can survive in the laboratory environment in aerosols and splashes  of culture medium. Mycoplasma has been shown to cause numerous types of  damaging and permanent changes in cell lines.

Persistent viral infections of cell lines may represent  an infection risk to laboratory workers and this risk can also be significant  for cell lines since they will clearly have some affect on the cell biology  which could influence the validity of any data generated with that culture  and could affect their performance and acceptability for manufacturing  purposes.

Endotoxins are the lipopolysaccaride-containing  by-products of gram-negative bacteria, which are another source of chemical  contaminants in cell culture systems. They are commonly found in water, sera  and some culture additives. They may affect the growth or performance of  cultures and are a significant source of experimental variability.  Furthermore, since the use of cell culture produced therapeutics, such as  hybridomas and vaccines, are compromised by high endotoxin levels, efforts  must be made to keep endotoxin levels in culture systems as low as possible. 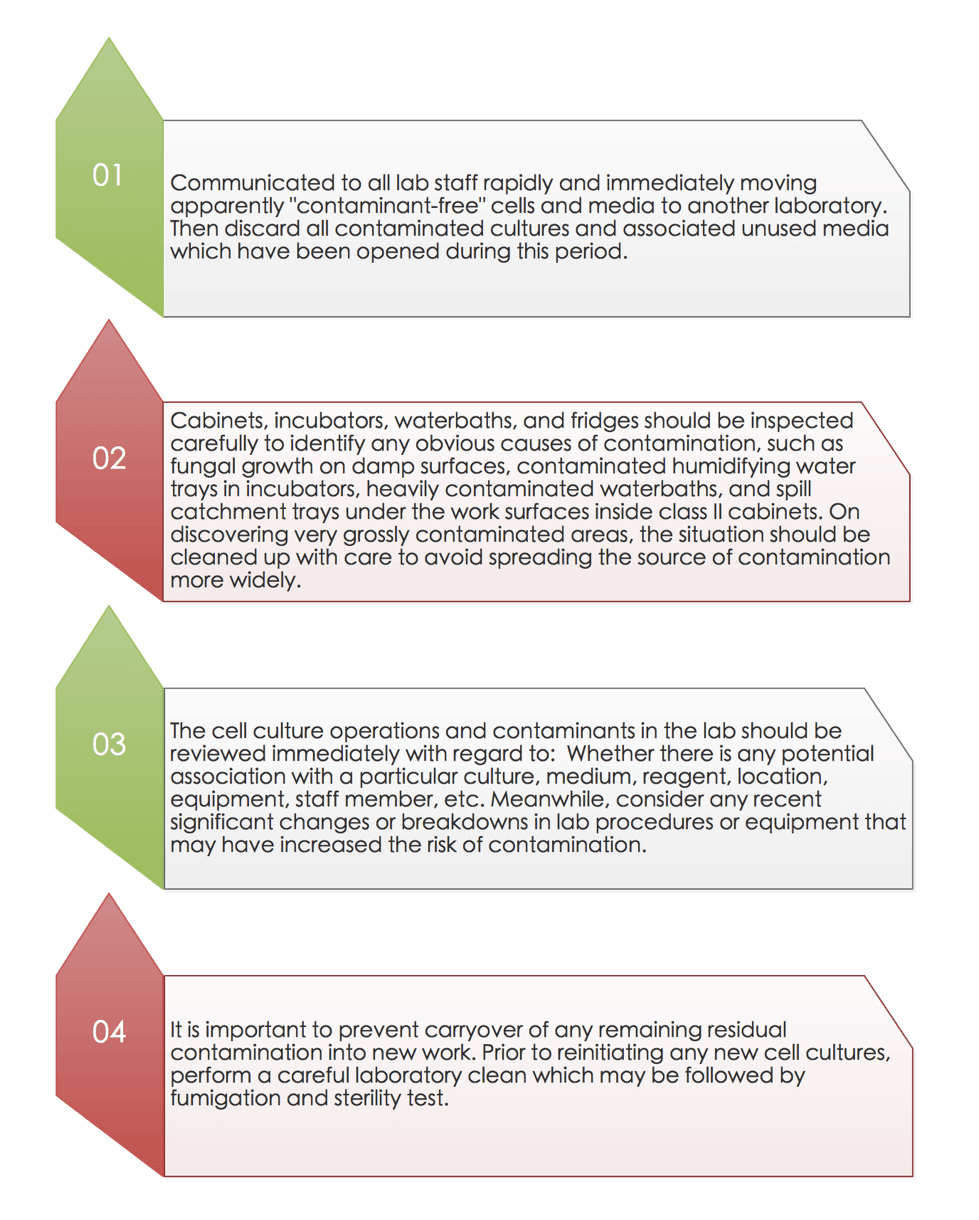 Laboratory Layout - The laboratory layout can be developed to reduce the risk of contamination by placing cell culture cabinets out of main thoroughfares, placing waste disposal collection away from clean work areas and sterile media storage and obviously segregating any work with (or storage of) microorganisms from preparation of clean cell cultures. Positioning of class II cabinets should be carefully planned to avoid interference by lab furniture/ equipment, walls, benching, doors, and other cabinets.

Cleaning and Maintenance - Laboratory cleaning is at the frontline of preventive maintenance where contamination is concerned. A formal routine cleaning regime for the general laboratory will help to control the levels of environmental contamination and thereby help to reduce the risks of day-to-day contamination.

Routine Quality Control - Establishment of a cell banking regime that will provide a stock of low passage cultures that have been subjected to repeated quality control tests is a fundamental aspect of good cell culture practice. Periodic testing of cell lines in use in the lab will give confidence that occult contamination, notably Mycoplasma, do not go unrecognized and where they do arise, are dealt with quickly so that the impact on any resulting work is minimised.

Even in the best laboratories contaminations do arise, the following procedure is recommended:

(2) Check for contamination by eye and with a microscope at each handling of a culture. Check for mycoplasma every month.

(3) If the contamination is new and is not widespread, discard the culture, the medium bottle used to feed it, and any other reagent (e.g., trypsin) that has been used in conjunction with the culture. Discard all of these into disinfectant, preferably in a fume hood and outside the tissue culture area.

(4) If the contamination is new and widespread (i.e., in at least two different cultures), discard all media, stock solutions, trypsin, and so forth in current use.

(5) If the contamination is widespread, multispecific, and repeated, check (a) the laboratory’s sterilization procedures (e.g., the temperatures of ovens and autoclaves, particularly in the center of the load, the duration of the sterilization cycle), (b) the packaging and storage practices, (e.g., unsealed glassware should be resterilized every 24 h), and (c) the integrity of the aseptic room and laminar-flow hood filters

(6) Do not attempt to decontaminate cultures unless they are irreplaceable.