With a highly automated approach, Creative Bioarray provides a highly cost-efficient S9 stability assay as one of our in vitro metabolism services and delivers consistent and high-quality data.

Mixed test compound solution and 1 mg/mL S9 solution, then dispensed to the assay plates designated for different time points. After the incubation, the supernatant from each well was transferred into a 96-well sample plate for LC/MS analysis. All tests had three replicates per compound and were validated by the inclusion of a positive control chemical with known stability under the assay conditions, to check for metabolic competency of the test system. Data provided include a percent remaining compound vs. time diagram, disappearance half-life, and intrinsic clearance. 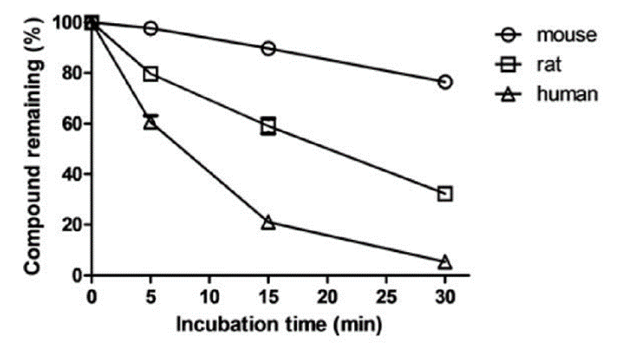 The ln peak area ratio (compound peak area/internal standard peak area) is plotted against time, and the gradient of the straight line is determined.

Creative Bioarray's S9 stability assay can be further extended to metabolite profiling and give out more information about the metabolism of your compound. Liver microsomal stability assay and hepatocyte stability assay are also available at Creative Bioarray. Liver S9 fraction (Cat. CSC-C4093X) as a product can be used in genotoxicity tests such as Ames test as a metabolic activator. To find out more about our services and products, please feel free to leave a message below, or contact us.